These two binoculars provide by far the best images and are primarily used for nature observation during daytime. But they are also stunning for the night sky.

These small binoculars are a supplement to the Swarovski binoculars. It is compact and lightweight, so it is good for day trips. The view is decent and it shows a lot in the sky as well. Observation is very comfortable due to the long eye relief.

After my friend René had told me a lot about his binoculars and observations with them, I became very interested and finally decided to buy these binoculars. The optical performance is actually very good. Due to its size it is mounted on a tripod (Manfrotto 055XPROB) with a video head (Manfrotto MVH502AH). First observations were very impressive. 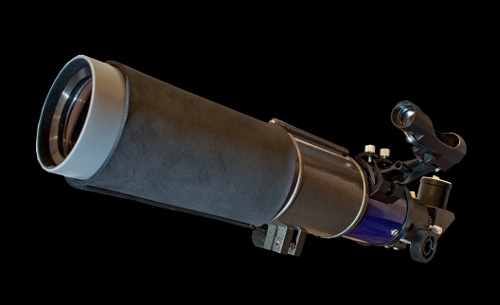 In May 2018 I could buy a lens (55/500mm) on the astronomical second-hand market, which was in very good condition. A friend donated me the tube incl. focuser, tube rings and dovetail bar of an old refractor (70/700mm) and I built a new refractor from it. The focuser is completely made of plastic, but serves its purpose. With a total weight of about 1kg (incl. diagonal prism) the refractor is also quite light. The origin of the lens is unknown, but Tele Vue is suspected.

Initial observations were very convincing. Jupiter appeared sharp and rich in contrast at 80x magnification and offered some larger structures in the cloud bands. The GRS is easy to see. Even the rather small moon shadow of Europa is recognizable with this refractor. The observation of double stars is also particularly aesthetic.

This classic refractor has landed with me due to a lucky circumstance. Even if it already shows clear signs of use, the optical performance is really excellent. I use this telescope very frequently for group observations, whereby sun, moon, planets & double stars are most often observed. 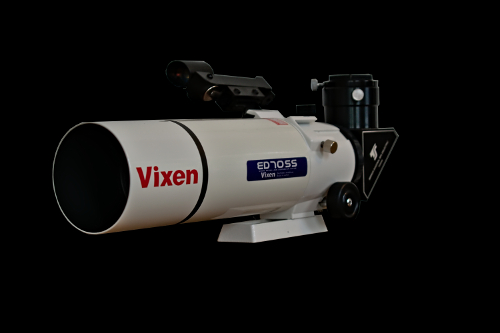 This small ED refractor I bought in September 2017 on a star party. Weight, size and especially the optical quality convinced me. This refractor is mainly used with a photo tripod and the DwarfStar mount. In March 2021, I replaced the original focuser with a Baader Diamond Steeltrack. 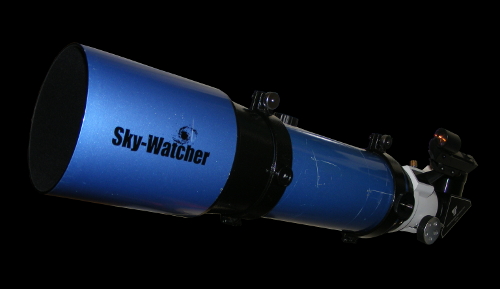 I got this short focal length refractor at the beginning of 2016 from my friend Uwe Pilz. It is used mainly for Deepsky observations. In the meantime, the tube was completely lacquered in white.

This is my largest ED refractor and replaced the 152mm achromat.

Binoculars & Telescopes - no longer in my ownership 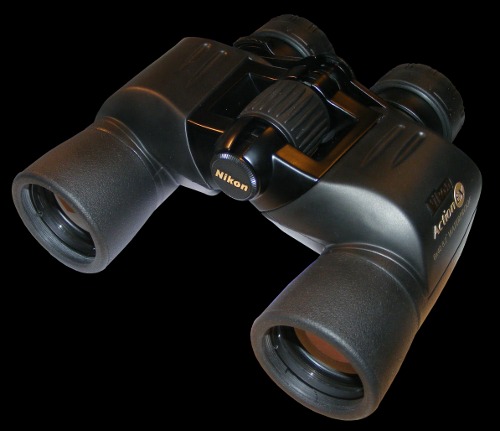 I bought this binoculars in May 2014 after long researches to be more flexible for spontaneous observations. With a true field of view of about 7.5°, a moderate weight (about 900g) and very good optical performance it is a pleasure to explore the sky. I was surprised, what this quite small aperture can show even under urban skies. I have sold it after I received the binoculars from Swarovski.

On detours this small achromat came to me, which is mounted on a Vixen Porta with heavy tripod. The achromat was lovingly named "Astrofaust" (astro-fist) by its former owner. I mainly use this refractor for observing deep sky objects from the city. Especially open clusters and carbon stars are the main targets.
This refractor was made by an amateur long time ago, whereby a can is used for the lens, water pipes for the tube und diverse adapters for using 1.25 inch equipment. For focussing an old camera lens was exploited. Or you simply shift the water pipes.
Later I replaced the tube, based on water pipes of course, and a new 1.25 inch focuser including finder base. The optics were cleaned and astigmatism & coma was reduced as best I could.
However, this telescope is rarely used because it is optically inferior to the Vixen ED70SS. 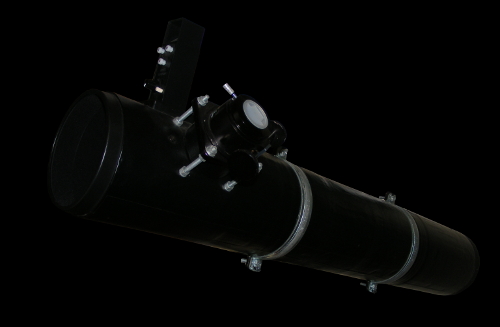 This small Newtonian was my first telescope and was sold by Dörr Danubia under the name Saturn 45. Since 2006 I took more care of this quite good telescope, which is used mainly for observing planets from the city. The tube was coated with velour and insulated with wallpaper for radiators. The cheap 5x24 finder scope (made of plastic including the lens!) was replaced by a Rigel Quickfinder. The simple 1.25 inch focuser had to make room for a solid 2 inch focuser, so that I reached at least 2.4° of true field of view and also could use my 2 inch filters from Lumicon. Additionally I mounted a fan for a faster cooling of the primary mirror.
In the meantime this telescope was sold, because it was replaced by the 102/1122mm ED refractor. 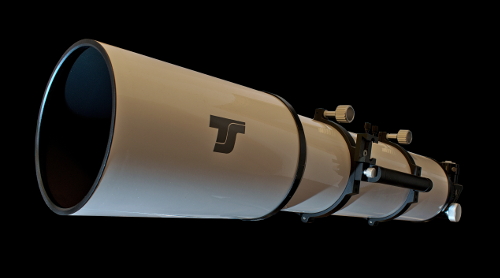 This was my largest refractor and especially the weight should not be underestimated compared to the 120mm refractor. Nevertheless, this telescope shows a lot in the deepsky area and I enjoyed using it. However, in the end it was replaced by the 152mm ED refractor. 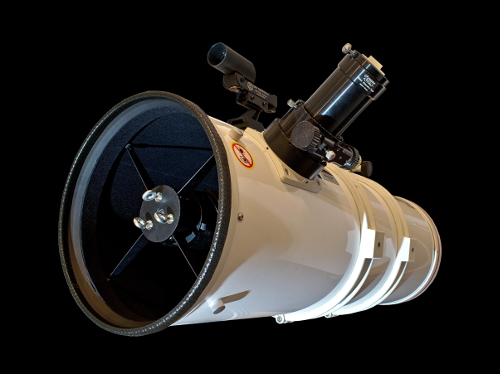 This fast Newtonian served as a compact alternative to the 8-inch Dobsonian, if you can live without a nice star representation over the field. Despite an obstruction of almost 41%, the Newton shows quite a lot. It was mainly used when I needed maximum aperture with the least possible transport effort. 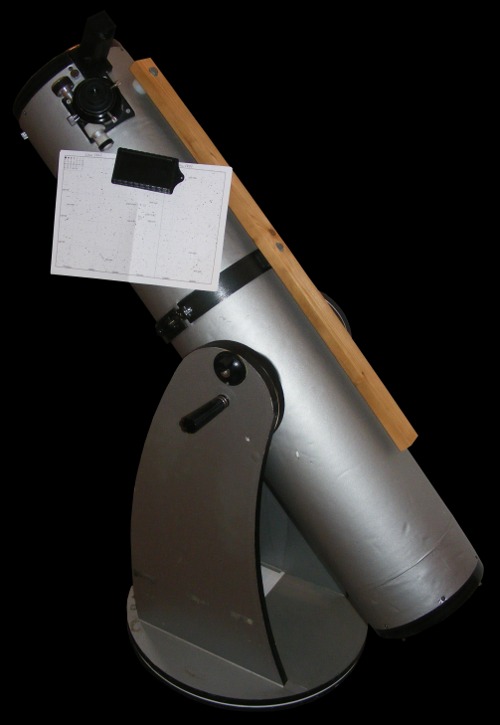 This classic Newtonian from Skywatcher I got in September 2011 at a star party from René Merting, one of my best friends and a very active visual astronomer. Since that time this was my main telescope under dark skies. Especially faint objects are the main target for this telescope, where it performs well for me. The first owner did some modifications: tube insulation, velour coating, smaller secondary mirror and tube extension and changes to the altitude bearings.
The magnets are for balancing but are also good for holding star charts.
In the last years, the affection for refractors has grown, so that the reflector telescopes in general were only rarely used. I sold the Dobsonian to a student. 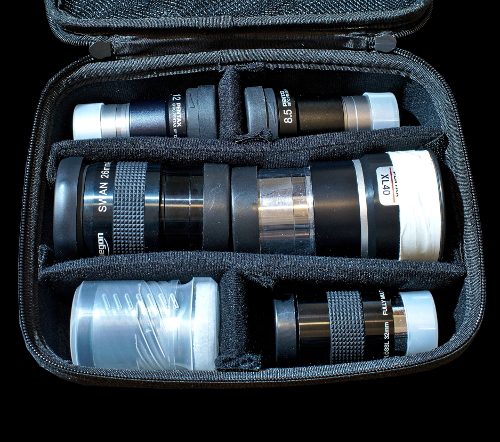 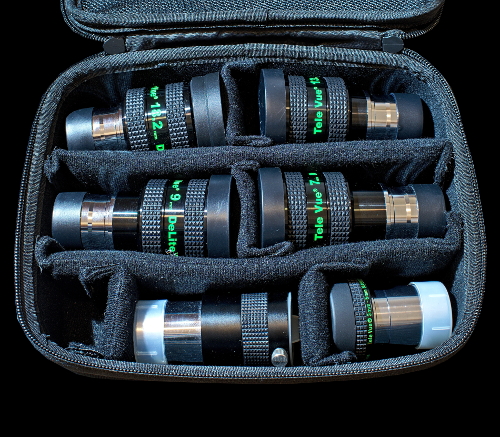 Since I observe with glasses and like to sketch at the telescope, I use mainly eyepieces with a long eye relief: I also have a few secondary eyepieces and a good barlow lens: Nebula filter: Furthermore I also have several color filters from Baader.